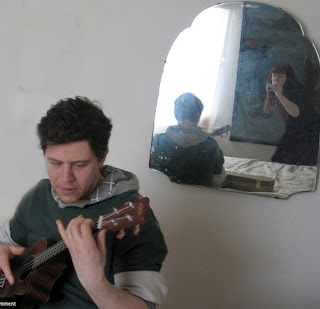 I've never yet been recognizably featured in an advert, but I have tried lots of times.

The one I hoped would come off was an actual writing commission (rather than placing already existing songs) for match.com. Joe Peet and Eva Eden  (www.myspace.com/evaeden me and Eva pictured above) and I worked on it together.

The pitch: A boy and girl sing an impromptu duet in a music shop. The brief for the song was incredibly specific, so i was flattered to be asked to write one.

The song had to:

I think we did all of those things,  the one they used didn't. I think ours is better but then, thats just me.
Posted by paul mosley at 08:33