up stood the ape 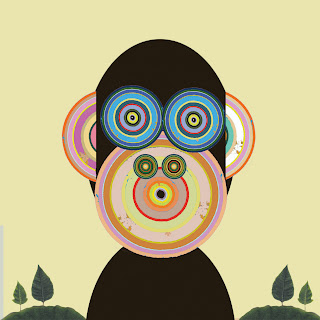 Some juvenilia for you. Just before my lovely band Moses got started, so around 1998, I wrote a lot of doings about monkeys. So 7 years later at my first solo gigs I sang those songs.
One of them got beefed up very nicely as 'How I became the monkeyboy'
One of them 'Pigs and Monkeys' was like my main song and I now actually cannot remember how it went.
And one of them 'Up stood the ape' was simply a title I'd seen somewhere in my day job (as a video tape librarian at SVC television, great place)
By the laws of serendipity several years later when I'd forgotten about this slight little song I went to the house of my new fiddle player Joe Peet to be greeted by a giant poster for the film 'Up Stood The Ape'.
Turns out Joe's flat mate Antony Somers was the star of this obscure short film I had never actually seen, only pinched a title from.
This probably goes to show something but I couldn't tell you what...

'Up stood the ape' the film by Heidi Easton is on YouTube go and have a look...   it has nothing to do with this song which I only include here because I sound so astonishingly young.
Posted by paul mosley at 11:01